Grab a coffee and let us walk you through 200 years.

The shop we now all know as 200 Degrees Coffee Shop and Barista School on Lincoln’s Sincil Street has seen varying fortunes and many owners, businesses and families.   As 200 Degrees becomes the new custodians (under ownership of Lincolnshire Coop) we reflect on the 200 Years of history wrapped in this site, lovingly researched and assembled by Beryl George, local historian.

This pair of shops, with accommodation above, were built at the very start of Sincil Street. There is no evidence whether they were changed significantly in structural terms over those 200 years. They have seen changes in fortune, and accommodated butchers, toy shops and dining rooms. Especially interesting is the continuity of use of no. 35 as an eating establishment since at least 1861. The renovation of Sincil Street is giving these properties a new future, but it always interesting to hear of their past.

Sincil Street was laid out in the 1820s, although a lane running from the river to the bridge on St Mary’s Street had existed since at least the early 18th century, following the line of the old Sincil Dyke.

The plot of land which became 34-35, was sold to George Savage (a carpenter) in August 1824, by Edward Fowler, who had bought a large tract of land the previous year and was busy selling it off. Savage bought 373 yds2 (312 m2) for £74-12-0 (£74.60). By January 1825, he had erected five houses and by 1828 this had risen to eight: two houses on the frontage, and six behind in a yard or court, accessed via a passageway between the front houses. The 1828 valuation of Lincoln lists those living in the houses. A valuation of less than £6 was considered too low to have to contribute towards the rate for lighting and paving the streets.

George Savage died in 1834, leaving his property (which was quite heavily mortgaged) between his four children including Richard Savage, shoemaker and Frederick Bellamy Savage, cooper. It was very common to leave property in a will to provide an ongoing income. This would have provided for any widow (in this case Martha) and then helped adult children, especially women, with a steady income. Richard and Frederick Bellamy Savage kept ownership of the buildings until the 1890s, but there were many tenants in the properties which can be discovered through census returns, directory entries and items in the newspapers.

The opening of the new Corn Exchange and New Market in 1847-8, resulting in an economic upturn for Sincil Street, especially those trading in the area nearest to the markets. The new railway station on St Mary’s Street (which opened in 1848) had also helped the area, although not everyone benefitted immediately.

In the late 1850s, John Shirley started to run no. 35 as a grocery and eating house and was to continue until his death in 1880. By 1863, he was calling it the ‘Market Eating House’, obviously to take advantage of the trade brought in by the Friday and Saturday markets.

In the 1851 census, no. 34 was being lived in by Samuel Hopkinson, cutter (probably working for a tailor) and no. 35 George Kilmister, brush maker (an insolvent debtor). The tithe award of the same year shows the layout of the properties.

Richard Savage lived in no. 34 for a number of years, but by 1881 it was a butcher’s shop and was to continue as this until after 1901. Meanwhile, in the 1890s, both properties were sold by auction. In 1893, no. 34 was described as ‘a dwelling-house and butcher’s shop, with yard and outbuildings’ in the occupation of Mr Andrew Spafford. The annual rent was £22. The minimum price was not reached at the auction, but it was afterwards sold for £390.

After John Shirley’s death, no. 35 was run as a shop (possibly a grocers), with George Jackson in occupation from at latest 1883. By 1891, he was also described as an ‘Eating House Keeper’ and George and his wife, Harriet, ran this business until around 1910. Meanwhile the property had been sold in 1897 (for £450), when it was described as a ‘messuage and dwellinghouse and shop with yard and outbuildings … no. 35 Sincil Street … now in occupation of George Jackson.’

Between 1897 and 1916, both no.s 34 and 35 were owned by one person – Wilson Blaze – who had several other properties in Sincil Street. In 1910, no. 34 was described (for tax purposes) as ‘brick and slate dwelling house, four bedrooms, one shop, one living room, wash house, coal place and wc’. In 1916, both premises were sold again – no. 34 to George and Betsy Rousseau, who ran a ‘fancy repository’ and no. 35 to George and Annie Allen, who continued to run dining rooms. Betsy and Annie were two of George and Harriet Jackson’s daughters.

There is little which can be found out about the premises during the inter-war period. One story is that in December 1931, a bedroom above the Rousseau’s shop, used to store Christmas toys awaiting collection, was destroyed by a serious fire. Despite being around 8pm, the shop was still open and fortunately no-one was hurt. The shop itself only suffered water damage. One interesting detail was that the bedroom was still lit by gas: it was thought that a falling lamp had caused the fire.

1977, queueing for bread during a strike, Windmill Café and Morley’s in background. Credit: Lincolnshire Echo

Both shops were sold in the post-war period. Following the sale of no. 35 in May 1945 it became the Windmill Café, lasting until the 1980s (and the name retained for longer). No. 34 was sold in 1949. Briefly the home of ‘Modern Decorators’, it rapidly became Morley’s Market Shop, selling knitting and rug wool (lasting until 1979).

Visit Lincoln, The Lincolnshire Coop, the Lincoln Council and the BIG for making us so welcome and helping us to settle in so quickly.

If you're passing and fancy being part of the past, and future of Sincil Street, pop in to see Demi the General Manager, and team. 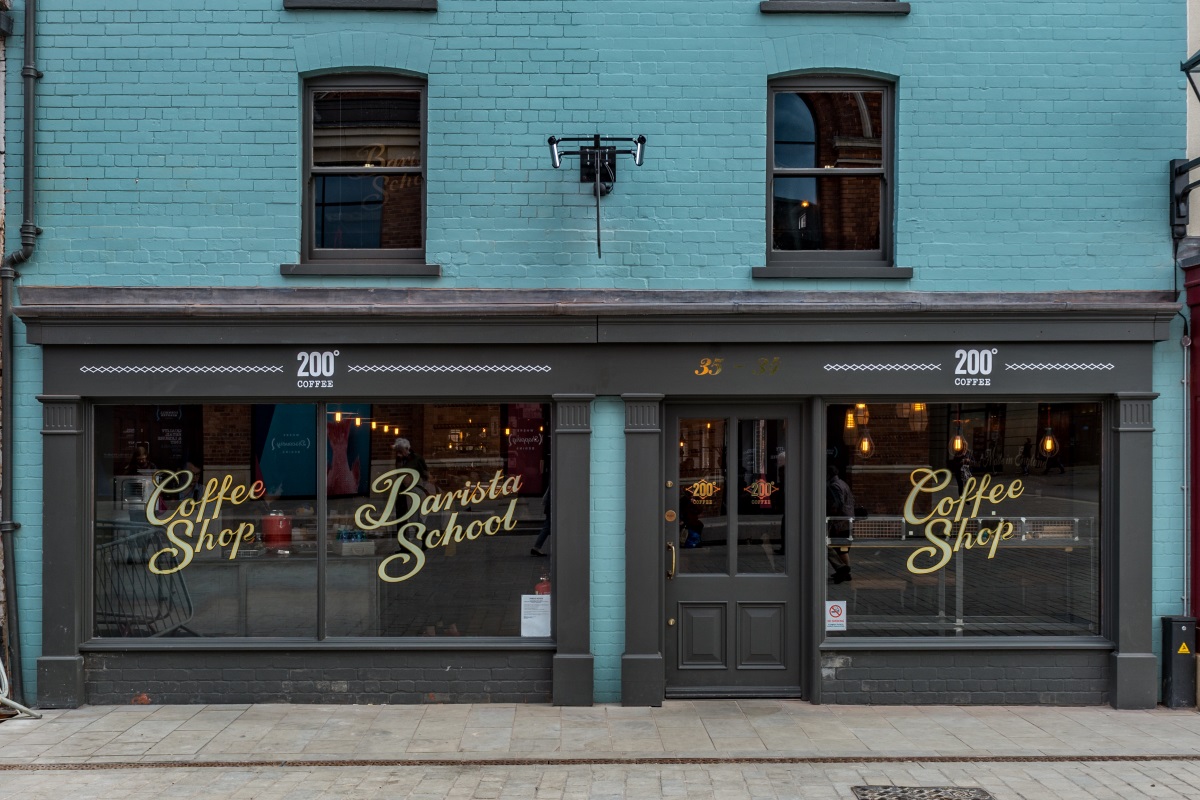 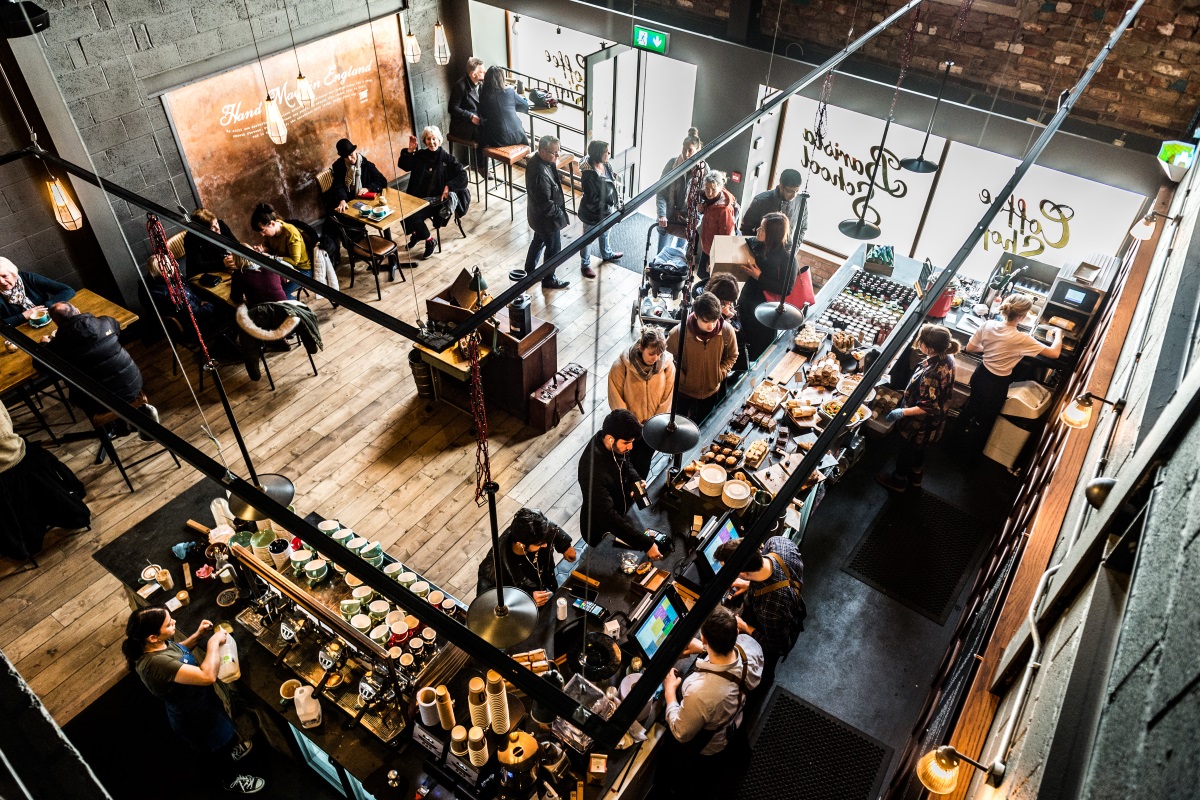