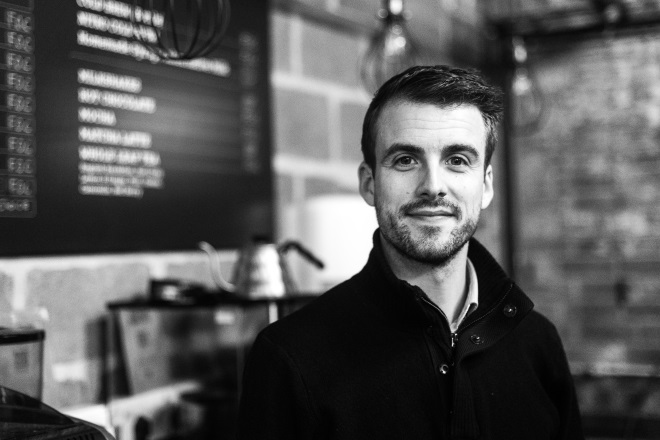 Coffee took me around the world. Seriously, it did, my first experience in the world of coffee (asides from drinking it) was as a barista with a ‘famous high street coffee retailer’. I had a training session with an Italian chap, whose passion, belief and creativity convinced me that the bean was indeed sacred.

The hook was in, this guy’s care and methodology was inspiring. From that point onwards I was determined to learn this trade and to get good at making coffee. My knowledge vastly expanded when I went to New Zealand and met a fellow traveller who taught me how to use a popcorn machine to roast my own beans. After a fair bit of trial, error and five melted popcorn machines, I had my first drinkable roast, albeit with an aroma of melted plastic. How’s that for artisan coffee?

I then fulfiled a lifelong ambition, bought a motorcycle and  travelled the islands of New Zealand taking in as many coffee shops as I could and what before was an interest and a job, transformed into a passion and a vocation. Home was calling, and I found myself in Nottingham where I met Rob and Tom and after a few cups of coffee, we realised that we shared a vision as to how coffee should be. As I had managed to kill 12 popcorn machines, we invested in a roaster, and 200 Degrees was born. We had some good roasts, some bad ones and some downright ugly ones. But the sheer enjoyment of what we were doing, enabled us to create what became our house blend, Brazilian Love Affair. One roast house, 8 cafés and 5 schools later here I am, but they still haven’t bought me a new popcorn machine.

Why do I love coffee? Well, it is simple, I don’t keep 9-5 hours, I work hard and that involves being creative with some quite amazing, like-minded people. You could call it work, but the way I see it, I don’t have a job, I have my work and I have a life.